The Nuba Mountains of Sudan

While USASSCA is not affiliated with any of the political or military groups, its formation has been officially endorsed by the American branches of

In addition to these groups, leaders of diaspora communities have endorsed the formation of USASSCA from:

The meeting to create USASSCA took place at Temple B’nai Jeshurun in Des Moines, Iowa, a Reform Jewish Congregation, hosted by Rabbi David Kaufman, HelpNuba.net, and the Steering Committees of Help Nuba and USASSCA. The proposal to create the organization was unanimously approved by the 150 national and regional community leaders present at the initial meeting on August 26, 2012. The gathering also approved the immediate creation by the Steering Committee of an Acting Board and Advisory Council for the organization which will be announced soon as well as the creation of the USASSCA Congress over the coming year to be inducted at the organization’s next annual meeting at the end of June, 2013. 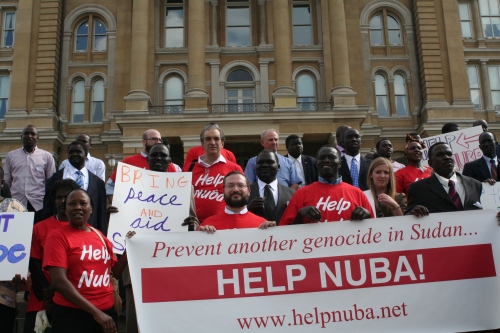 Standing on the steps of the Iowa State Capitol during the Walk to End Genocide. August 26, 2012.

The Help Nuba – USASSCA Conference featured a Walk to End Genocide in which nearly 250 people participated, the vast majority of them members of the Sudanese and South Sudanese Diaspora. 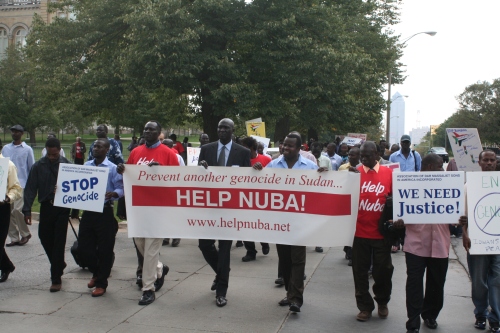 Philip Tutu, Digol Deng, and Yassir Kouri among nearly 250 others on the Walk to End Genocide Des Moines Aug 26 2012

Presentations and speeches at the joint conference were given by in no particular order:

The members of the Steering Committee of USASSCA are:

2 responses to “The Creation of USASSCA”